One of the most interesting parts of the Emergence project was trying to figure out how to visualise existence before the big bang. 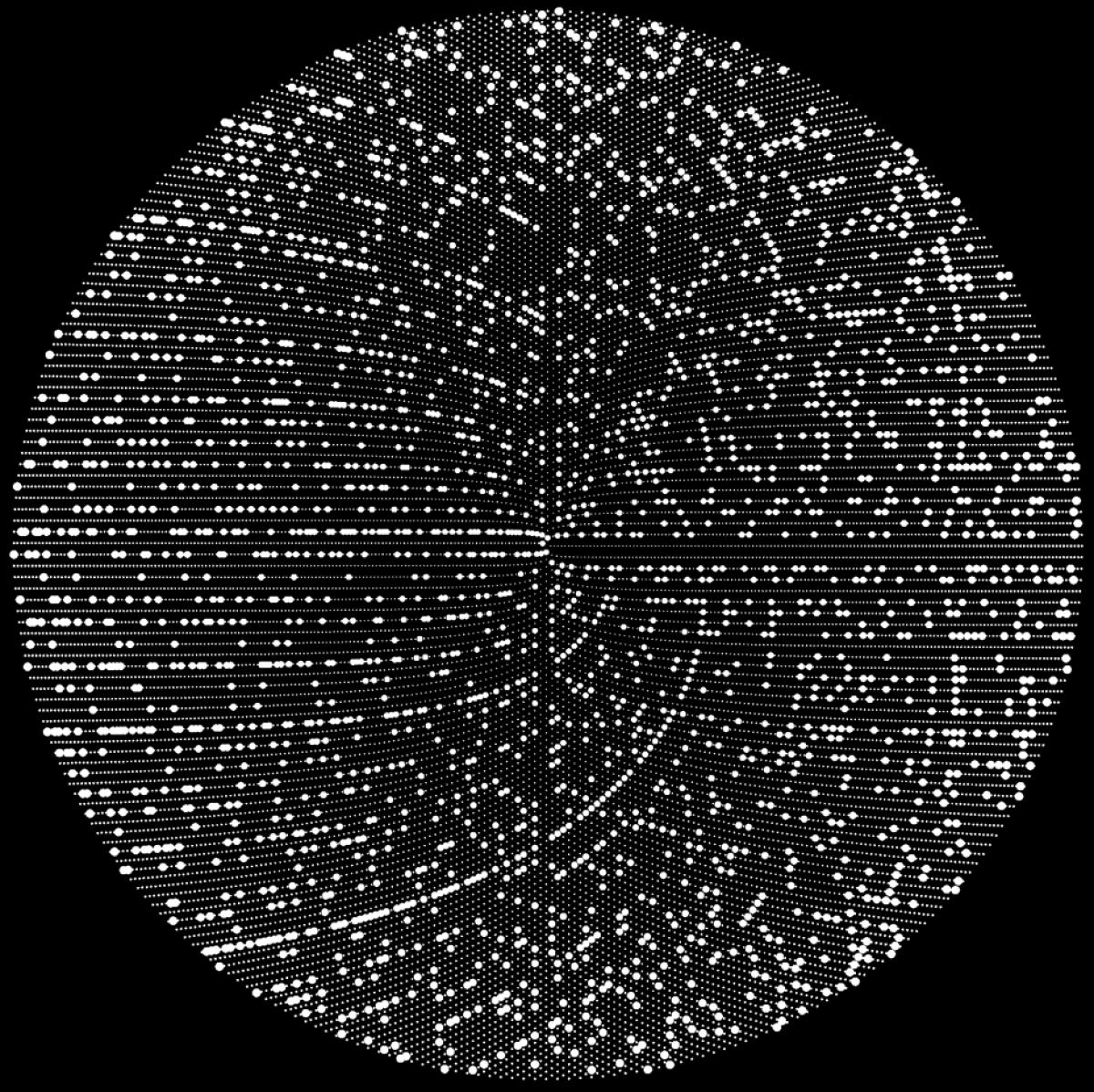 I wanted to drill down to the fundamentals of nature, and visualise what sorts of structures could exist before the physical universe of matter, and perhaps even time, came into being. I couldn’t accept the idea that nothing existed “before” the big bang, the “laws of nature” for want of a better way of putting it, needed to be there in order to give rise to what we see above us, and there seems to be no possibility of nothingness existing anyway!

So how to visualise this pre-universe form for the live audio-visual shows? I chose several ideas which seemed to underlie many descriptions of natural systems – symmetry, waves, dimensionality and quantity. Luckily for me they all gave beautiful visualisation options too. Perhaps that’s not a coincidence if we’re appreciative of nature’s underlying form on some level already – our brains are very good at spotting patterns we’re not consciously aware of, such as music!

So back to the task at hand, I decided that quantity seemed possibly the most fundamental on my list, because without this, how can any structure be described or imagined? So the next question became, how to visualise the concept of quantity? Counting is the most basic assessment of quantity, and numbers themselves have a deep structure of their own building blocks, the primes, which just so happen to make beautiful visual scenes of their own. But these visual scenes turned out to be more interesting and meaningful than I ever expected, which is why I’m going to the bother of writing this.

The primes are the numbers from which all other numbers are built. So primes cannot be divided by any other number, only by themselves, or by 1. But even though we’re dealing with such a simple system and idea, one of the simplest and refined ideas I can think of, after thousands of years of hard work, humans still can’t fully understand the structure the primes make amongst the non-primes. There’s even a million-dollar prize up for whoever can figure it out.

To explain that more clearly – if you look at the first image on this piece (created by Dugan Hammock). what you see is the number line, from 1 to 10,000, rolled out in a spiral, 1 in the centre, and 10,000 at the end of the outer-most spiral ring. The small dots are non-primes, and the big dots are primes. There are other ways of visualising how the primes and non-primes interact like this, (some of which are also shown in the live show) but the consistent point is, that no one can predict when the next prime will come in the sequence of numbers, and no-one fully understands the pattern we see. But critically, there is still an inkling of a pattern!

It’s not a totally random structure, but it’s also not a pattern we can understand, yet. I think that’s really interesting – at the most fundamental level I could think of visualising, nature is comprised of seemingly imperfect form.

Maybe we’re just too stupid to appreciate the perfection of nature and one day might solve this pattern, or maybe the idea of perfection is something more human than natural. *

So if nature is fundamentally built of a combination of precision and imprecision, so what? We could say nothing in the real world is perfect, with much more conviction than before. But perhaps it has deeper roots in the idea of knowledge, in that nature is constructed of form that we cannot comprehend, and that our systems of knowledge are currently insufficient to create a full description of nature.

Links to Universality (and music)

This idea of nature being built of precision and imprecision lead me to the idea of “universality”, which is a statistical property found in a wide range of natural systems from those in quantum physics to decentralised bus stop times and avalanches. All sorts of natural systems have a link in the structure of their data, which is partially random and partially patterned, where a key factor in yielding this property is that each data point is correlated with the others – the data points are not independently created. 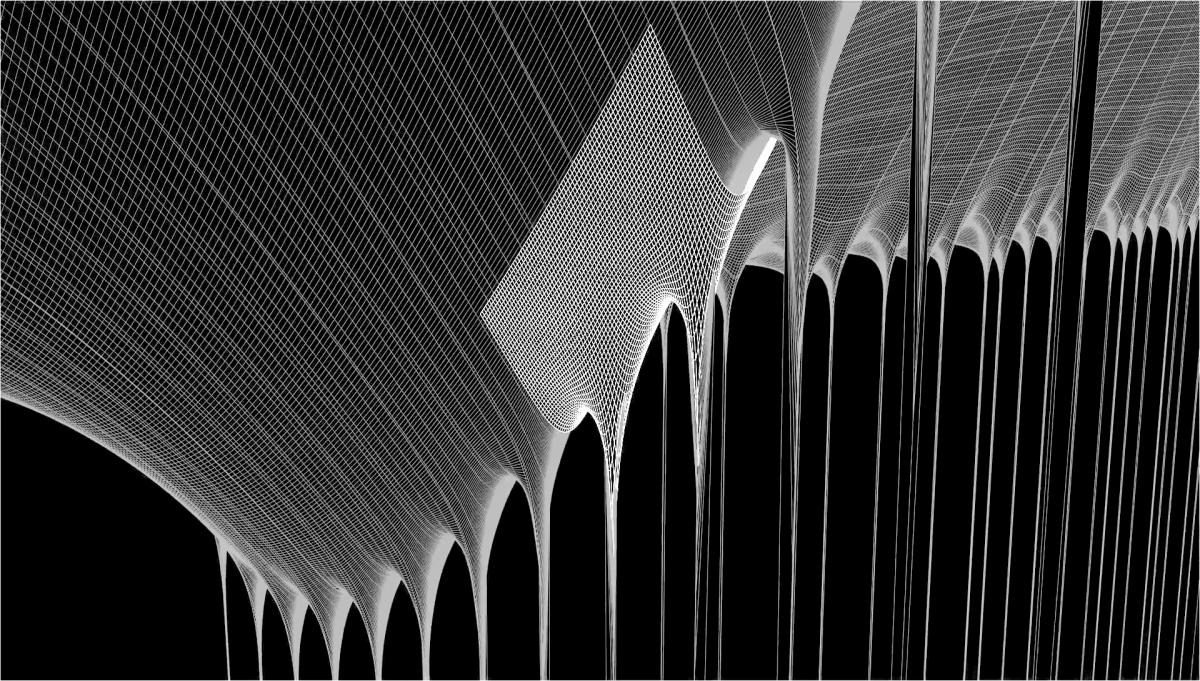 It turns out that Riemann’s Zeta function (also visualised in the live show in collaboration with Dugan Hammock, and shown here as the second image), which relates to the distribution of the primes, also has this statistical property (shown by Hugh Montgomery in 1972). So even if the Sacks spiral images we have here don’t demonstrate universality themselves, we’re looking at something closely related to this natural phenomenon. This would make sense in terms of the types of systems showing universality, because the positions of the primes must be correlated, in that each defines the positions where the others cannot be (as none are multiples of any others by definition).

The interesting thing about this link to other natural systems, is that the types of systems shown to have this property are complex real systems out there around us, with many moving parts and interdependencies between these moving parts. But writing all the whole numbers out in a line starting from 1 with the primes and non-primes doesn’t seem to be a complex system like this, does it? It seems to be the exact opposite, I can hardly think of a simpler system, and it doesn’t have moving parts, it exists in a static form. Perhaps it could be considered to have moving parts in that as we build numbers from primes the subsequent spaces for the next primes are created in an interdependent mechanical fashion, linked to the moving parts of the real world systems demonstrating universality.

System classification aside, it seems to me that nature has performed an amazing trick of compressing something too complex for us to grasp into one of the simplest things we can imagine! Interestingly, I think this is how the greatest, well the most catchy, at least, music works too - the most subjectively interesting melodic form presented in the simplest way – you hear the riff and it’s seemingly easy to understand, but it has a spark of something more and you feel strongly because your subconscious is excited about some subtle numerical relationship or idea in there which tickles your pattern searching instincts. It’s almost like the melodic form needs the simple part to appeal to our stupid conscious, and at the same time the complex subtle part to appear to our clever subconscious. This is what melodies and chords are, these sorts of patterns in sound frequencies. I also don’t think it’s a coincidence that we’re attracted to musical forms which have this sort of deep potential link to nature, in that our brains have evolved to be the prime spotters of patterns in nature in existence!

This sort of maximised compression of the richest behaviour into the simplest of rules also goes to the heart of the idea of emergence, which is the over-arching theme of my visual-audio project that lead me to this chapter based on the primes. Nature seems to be built on simple laws, which yield immense complexity and richness in the world around us, despite their seeming simplicity – rich behaviour emerges from simple structures.

Footnotes on the Idea of Perfection

*Certainly no perfect forms can exist in the physical world, and our most successful models of reality at the smallest scales lack absolute precision as a fundamental feature. But for the most part, absolutely precise forms and relationships are great at modelling how the world around us works, and it seems plausible that nature is precise at its core. Maybe that’s just a result of Western schooling and ancient ideas of a Platonic realm, but I was surprised to find this misunderstood messiness in plain sight in this simplest of natural structures.

Perhaps the best interpretation would be that precise, deterministic (i.e. rule based/exactly reproducible), processes may not need to yield precise pattern (i.e. rule based explanation of the entirety of their output). The logical source of the apparent disorder may be inaccessibly hidden from us in the form of an unproveable Godelian truth – something which is true but cannot be proven to be so (see incompleteness theorem for more on that idea).

Another way of putting it would be – if you see a pattern there must be a rule generating it. But if you don’t see a pattern that doesn’t mean there is no, equally precise rule, generating that seeming randomness (even when the initial conditions are precisely defined and chaotic systems are excluded). That just makes me feel uneasy. Perhaps it shouldn’t. 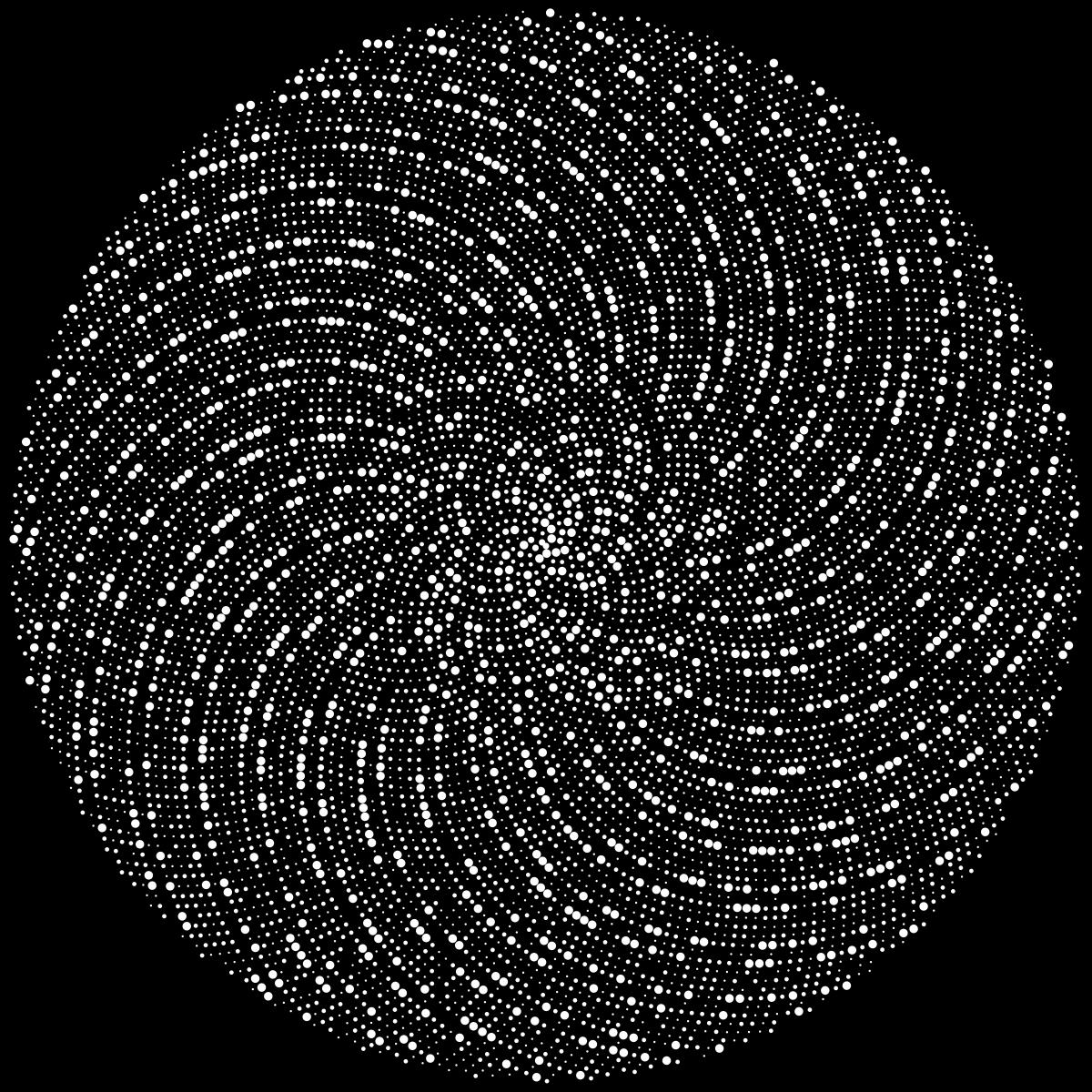 This situation is comparable to the Normal numbers, whose infinite strings of digits are without discernible pattern, even though we know those digits are precisely defined. Although in these cases there is no pattern whatsoever, differing from the primes visualisation being looked at here, which has some pattern visible.

This is interesting as it puts a limit on some forms of knowledge, in that we can only know a given seemingly random string of numbers or random pattern, is in fact, random, if we can create that string or pattern ourselves. And furthermore, if the above interpretation is true, there is no possible method for working in the reverse direction to decide if a seemingly random string or pattern is created by a deterministic process. This is an example of Turing’s halting problem, and Godel’s incompleteness, in another guise, as pointed out by Andy Lomas when I had a discussion with him about this issue (Andy created the beautiful generative particle aggregation images used on the Emergence records).

And so to finish, another look at this deep natural structure of the primes on which so much is built. This time wrapped into a different spiral arrangement. Thanks for having a read of this, more to follow soon.