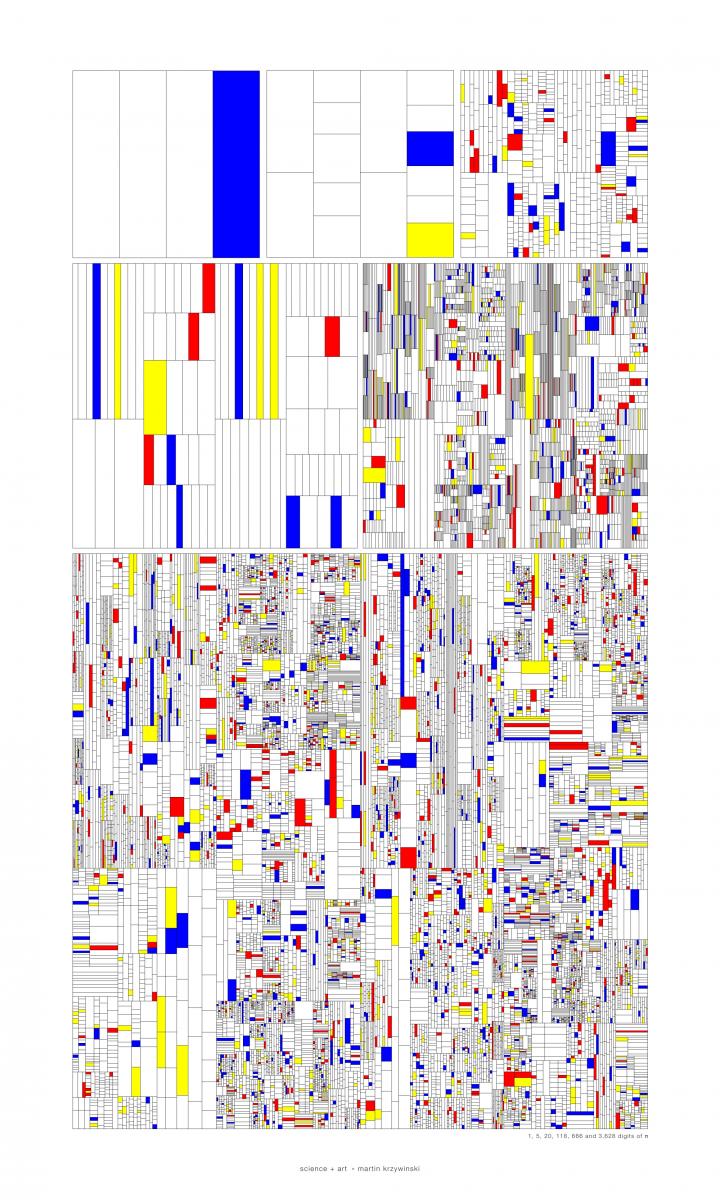 I find this image deeply beautiful and deeply troubling, and I’ll try to explain why.

Science for me, was always an aesthetic and emotional pursuit, imagining interacting structures and processes each one giving rise to the next. To learn the reduced atomistic form of a system could yield vastly compressed knowledge, the smallest ideas capable of spawning the complexity of the world around us. This property of compressibility in nature seems synonymous with beauty. On one hand we may have a complex and difficult method for explaining something we observe, on the other we may have a simple and concise method which describes the same system. Nature seems to tend towards the latter, more elegant mechanisms, to yield our complex surroundings. The richest output from the simplest, most exquisite, starting conditions. Combined with paradox and mystery in great supply, the foundations of nature seem to embody as much art as they do traditional elements of science, as demonstrated by this image - Martin Krzywinski’s 6 tree maps of pi.

The divisions of each square appear random, because statistically speaking, they are. We know of no pattern or structure within the sequence of digits represented here via Martin’s tree map system. Yet, another way of representing the same data, would be to simply draw a circle. At a deep level, nature is both perfect order, and absolute disorder. That certainly feels more like art than science, to me.

I have spent much of the last 10 years looking for this art contained in science, using the inherent beauty of natural systems as a visual backdrop to score my music to, and form the content of my live performances. This latest audio-visual project is titled “Yearning for the Infinite”, and was created as a response to a commission from the Barbican arts and learning centre in London, around their emergent technologies yearly theme. Big data, biotechnology, fintech, machine learning, as a species and society we have an insatiable drive for progress, growth, knowledge, we always want more. But ultimately, there is no end point, like the child who wants whatever the other has, we are yearning for the definitively unreachable, the infinite.

The idea also has rich links to religious beliefs and iconography, natural science, mathematics and art. A host of powerful imagery to draw on for an intense visual experience, and also a concept which is perhaps better suited to artistic than purely logical representation, given its by definition, incomprehensible nature. It seemed like something I could have a lot of fun with. 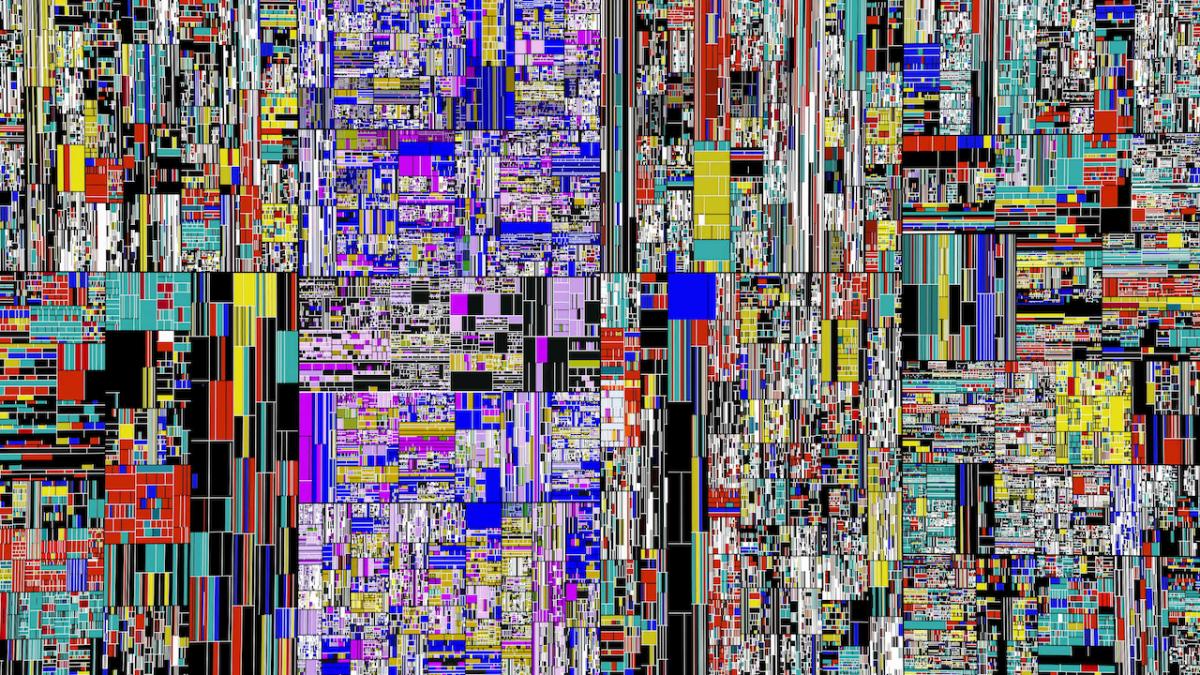 One chapter of this story is about an infinity contained within one of the most important elements of all of mathematics, and by extension, all of nature – pi, the ratio of the circle’s circumference to its diameter, as shown here in 6 different tree maps. The first, top left box, simply shows the first digit of pi, 3, via three dividing lines. The second tree map shows 5 digits, 3.1415. Followed by tree maps containing 20, 118 and 3628 digits of pi (with random coloured blocks in Mondrian style), so that you can see how the formless structure emerges (the structure coming from the tree map system, the apparent randomness, from pi).

This seemingly random sequence of digits appears to continue indefinitely (31 trillion digits and counting). It troubles me that this potentially infinite disorder is in some sense the same thing as the perfect order of a circle. Intuition tells me that ordered systems should yield ordered outputs, that there is a reason for each datum. Much of science works in that way at least. But the more I have been searching for the deep aesthetics of natural systems, the more I have come across disorder in seemingly ordered systems. My projects visualising Sacks Spiral and Rule 110 are two examples, relating to the aesthetic foundations of numbers and computation, respectively. Disorder in the form of supposedly fundamental unpredictability also shows up in the foundations of physical systems too, in the realm of quantum physics.

Perhaps true chaos is a necessary building block of an ordered world. The ancient Greeks thought so, with the void of chaos as the starting point of their creation myths, giving rise to Gaia, Tartarus and Eros. Perhaps forms emergent from disorder bridge the gap between something and nothing. It’s a nice topic for art and storytelling at the least.

But of course, the digits of pi are not random, they are the digits of pi, and must be as each are. They just pass any statistical test for randomness to date using as many of pi’s digits as we have been able to create. They have the property of disorder, while embodying perfect order. It’s all a troubling and beautiful situation, nature pulling the wool over our eyes as the great artist and joker.

Our concepts of pattern, order, disorder and randomness are inescapably important, but seem flawed. We cannot exist without the order of our bodies and our environment. (Almost) every living thing desperately uses the suns energy to fight against disorder, the arrow of entropy which will kill via eventual disorderly malfunction. Even the observable universe will eventually fall into its own heat death of absolute disorder. But somewhere within an infinite world of possible disorder lives the seed of the physical universe and life in the guise of the precise mathematical form which underlies much of nature, such as pi. This mutually opposing and mutually containing situation has more than a smidgen of Daoism and modern physical complementarity about it too. It all sounds at risk of straying into tall tales, but there it is, when we try to make sense of the simplest things in the world around us.

And what about the analogy of beauty as compressibility we started out with? We need an infinite amount of information to record an unbounded non-repeating decimal expansion of numbers such as those seemingly embodied by pi. Yet nature compresses this information into the single form of the circle, bestowing it with infinite beauty. A perfect form bridging order and chaos and containing all possible knowledge in its digits.

If you'd like to know more about wider album project, please see:

More information on how Martin created this image, along with prints for sale and many interesting things is online at: http://mkweb.bcgsc.ca/pi/piday2015/methods.mhtml